The Story of Lord Ganesh – God of Good Beginnings 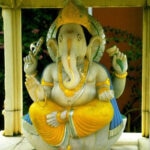 The Story of Lord Ganesh – God of Good Beginnings

Despite his strange appearance, Lord Ganesh is often the Hindu deity that Westerners feel most drawn to. With his elephant’s head and plump baby’s body, Ganesh is the god of good beginnings and the remover of obstacles. He should be invoked at the start of any project or undertaking. But how did such an important deity get his strange form?

Lord Shiva and his wife Parvathy were living together on Mount Kailash in the high Himalaya. One day, Shiva had to leave unexpectedly. In his absence, Parvathy decided to take a bath, and while there, decided that she needed somebody to stand guard at the door so she wouldn’t be disturbed. Scooping a handful of soapy foam, she fashioned a magical son from it. She placed the boy outside the door to stand guard with strict instructions not to let anybody in. Lord Shiva returned suddenly. Hearing where his wife was, he went to the bathroom to see her only to be met by this young guard he had never seen before. He demanded to be allowed in, but was refused entrance. He demanded again and was refused again. After the third refusal, he lost his temper and with the fire of his third eye, blasted off the little fellow’s head. Hearing the commotion, Parvathy came out of the bathroom and saw her magical son lying dead. She lambasted her husband who, full of contrition, vowed to restore the boy to life by giving him the head of the first creature he could.

As it happened, a royal elephant lumbered into the courtyard at that moment. Taking his magical trident, Lord Shiva removed its head with one mighty blow and stuck it on to the little body.

Thus was born Ganesh. To compensate him for such terrible treatment, Lord Shiva granted Lord Ganesh the boon that henceforth, he would always have the right to be worshipped first of the gods. To this day, if a Hindu is worshipping a deity, he will first invoke the blessings of Lord Ganesh, the most loved of the Hindu gods.